Are you looking for Martial Arts 77094? Look no further Tiger-Rock Martial Arts schools are here to help you enhance your life with one of the oldest art forms on earth. Jump on the mat at Tiger-Rock and take advantage of the benefits of mixed martial arts. 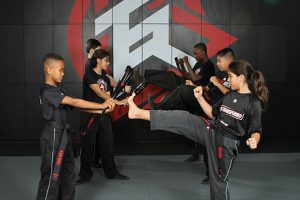 The Benefits of Taekwondo

Taekwondo is one of the main art forms that individuals practice at Tiger-Rock. This practice alone can improve your quality of life easily. The younger an individual starts, the more the principles stick with you. Therefore, this practice will teach discipline, which is quite hard to have, especially in such a shallow and greedy society. It also teaches individuals how to communicate in their everyday life, combined with some amazing physical skills that are excellent for your general health. Here are some of the many ways Taekwondo can benefit you and help you take control of your life.

The word is broken down into three parts: “Tae” represents the foot, the leg, or the action to step on. “Kwon” symbolizes the fist or the act of fighting. “Do” means the way or discipline.

Taekwondo is the right way of using Tae and Kwon, which are the fist and the feet or all parts of the body that is represented by these parts. This practice is a way to not only defend yourself, but its also a way to mediate fights. This concept derived from the meaning of Tae Kwon or “to put fists under control.” This practice was curated for individuals to use all parts of the body to stop fights and help build a more peaceful world.

Taekwondo dates all the way back to 50 B.C. At the time, Korea was split into three kingdoms. One was Silla, which was founded on the Kyongu plain in 57 B.C. Koguryo was based in the Yalu River Valley in 37 B.C. Lastly, the Paektche was founded in the southwestern area of the Korean peninsula in 18 B.C.

Taekkyon, also know as Subak, is the earliest known form of Taekwondo. Painting from this time period has been discovered on the ceiling of the Muyong-Chong, which is a royal tomb from the Koguryo dynasty. The paintings display unarmed individuals using techniques that are similar to those used in practice today. 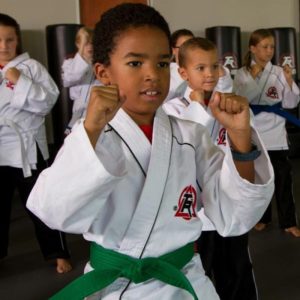 Tiger-rock is your go to martial arts training for your child!

How the Practice Spread Across the Globe

Although the practice first appeared in the Koguryo kingdom, it is the Silla’ Hwarang warriors are credited with the growth and spread of the practice in Korea.

Silla was the most advanced of the three kingdoms and would frequently be under attack by Japanese pirates. They received reinforcements King Gwanggaeto and his soldiers from the Koguryo kingdom to assist in driving out the pirates.

At the time, a few Sillian warriors were given training in Taekkyon by the early masters from Koguryo. These soldiers were soon to be known as the Hwarang. The Hwarang set up their militia for the sons of royalty in Silla named Hwarang-do. Additionally, Hwarang-do meant the way of flowering manhood.

Additionally, these warriors studied Taekkyon, history, Confucian philosophy, ethics, Buddhist morality, and military tactics. Their leading principles consisted of loyalty, duty, honor, bravery,  and justice. Additionally, the foundation of the Hwarang-do education was based upon the Five Codes of Human Conduct written by a Buddhist scholar.

Tiger-Rock takes pride in providing our students with the best technique and skill. Here at  Tiger-Rock Martial Arts, there is a program for every age, from adults to children. Additionally, Taekwondo is a great way to take control of your life and keep you more balanced. Many individuals experience growth because the practice promotes an overall quality of life. Furthermore, with Taekwondo you can learn how to have more balance to learning how to communicate in your everyday life. Stop searching martial arts 77094 and give Tiger-Rock Martial Arts a call at (281) 829-9300 to learn more information.