Tiger-Rock Martial Arts is offering Kelliwood Karate near me. We have over 20 exciting years of experience training students in Katy. In fact, Master Pollard and Master Reade, our chief instructors, each have over 30 years under their black belts in the discipline. But all of us are thrilled to pass down the disciplines of TaeKwonDo and Karate to people of all ages in Katy. 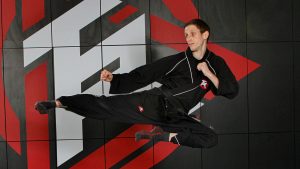 In Korean, TaeKwonDo stands for “The Way (Do) of the Foot (Tae) and the Fist (Kwon).” This style emphasizes striking, head-height kicks, side kicks, and spinning kicks.

It began in the aftermath of World War II, so, for martial arts, it is still young. When Korea was liberated of the Japanese occupation, old schools of martial arts were once again able to practice in the open. The Way formed as an amalgamation of Korean and Chinese forms, Taekkyon, Subak, Gwonbeop, and Okinawan Karate.

But TaeKwonDo is not only a martial art. It also takes place in the competitive scene as a sport. As a matter of fact, as of 2000, TaeKwonDo is a part of the Summer Olympic Games lineup. Additionally, the governing bodies of the World TaeKwonDo Federation and the International TaeKwon-Do Federation have held major tournaments globally for a long time. Tiger-Rock classes are an excellent way to prepare for your place in a competition.

On the other hand, Karate is a far more ancient fighting style. It originates from the Ryukyu Kingdom, current day Okinawa Prefecture of Japan, and takes influence from Fujian White Crane style Kung Fu. Karate’s influence lies in open-handed strikes, such as knife-hands, punching, kicking, elbow strikes, and knee strikes.

After Okinawa was annexed into Japan, it became popular among clubs at universities. It soon spread to the schools in the mainland. During the American occupation of Japan after World War II, servicemen stationed in Okinawa picked up Karate. Soon, Karate schools opened worldwide. Now, we have Tiger-Rock with Kelliwood Karate near me. 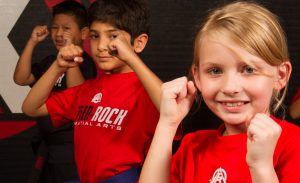 We teach Karate to people of all ages. And we design each of our programs with their age in mind.

Children from ages 4 to 6 train in our Cub Program. Here, they learn coordination, balance, and symmetrical movements. Karate classes are an excellent way to practice social skills and learn to respect others. Plus, it is a great channel for high positive energy. A Tiger Cub’s Karate lesson will be some of the most fun they have all week.

Our Junior Program trains kids ages 6 to 10. No one will disagree that this is probably the best time to start martial arts. Not only is this when you are most interested in Karate, but we can also teach the more complex techniques. In these classes we work on stances, speed and agility drills, striking, kicking, forms, and sparring. 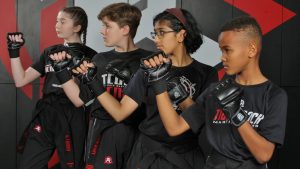 11 to 15 year old students should sign up for our Teen Classes. Tiger-Rock’s Kelliwood Karate near me is a perfect after-school extra-curricular. Practicing Karate teaches good citizenship, leadership, ambition, cooperation, and discipline. Character is something to build now and take with you for the rest of life as an adult.

Anyone 16 and up should enroll in our Adult Classes. Whatever your goals are, we can help you accomplish them. If you want to practice forms and earn your black belt, train for tournaments, or keep yourself in top physical shape, we have you covered.

The Benefits of Practicing Karate

All aspects of a person are built upon through the practice of karate. Its benefits can be direct and obvious like getting stronger our come as a surprise like a sharpening of your focus and concentration. Something like growing stronger in your self-discipline might be a happy accident for you, but, for us, it is the primary goal of any martial arts.

Tiger-Rock Martial Arts’ Karate school holds five key tenets: respect, loyalty, perseverance, honor, and humility. It is our hope that every one of our students walks out of our dojo’s doors exemplifying these traits to the rest of the world. TaeKwonDo demands and requires all these traits, along with the discipline and work that needs to be put in. 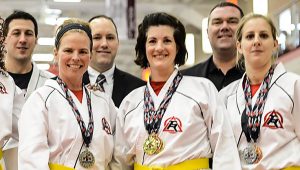 Perhaps the greatest trait we want a student to takeaway from our classes is integrity. We define integrity as doing the right thing even when no one is watching. This is necessary to practice Karate. A student in martial arts has to keep themselves accountable. There is no cheating your way to the results you want.

Another place to find integrity in TaeKwonDo is remembering that it is an art of self-defense. Instead of an act of violence, it controls and subdues aggression in an attacker and us. It asks us to always act in moral and upright ways.

Karate exercises all aspects of our physical fitness, from body composition to muscular strength. Our lesson’s stretching and head-height kicks work your flexibility, and warm-ups strengthen cardiovascular health. The calisthenics, conditioning, and core training we do build muscular strength and endurance. The repetition of our kicking and striking drills creates muscle memory and motor skills. A Karate class is a full-body workout. 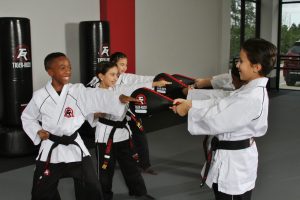 As of the Tokyo 2020 Olympic Games, Karate joins the battle. It is now an official Olympic sport. Besides that, the World Karate Federation has overseen major tournaments at the regional, state, and national levels for a long time. Our Karate lessons are a great way to prepare for your place in a competition.

Cooperation and a competitive spirit are also fueled in classes. We have classes specifically geared towards sparring. And the students drive each other forward and set drills up for each other.

You can find Tiger-Rock Martial Arts’ Katy location on Mason Road, South of I-10. We teach students from Kelliwood, Mason Park, Nottingham, and Green Trails. We also serve those from Cinco Ranch, Seven Meadows, Fulshear, and Cross Creek Ranch through our South Katy Karate school on Gaston Road. In addition, we have locations all over the Greater Houston area and the state.

You can schedule a free consultation and tour of any of our schools whenever you want. If you are interested in what all Karate can offer, then you should contact us right away. Call Master Pollard at (281) 829-9300 or email him at tkdstaff@katytkd.com. We are excited to pass down what we know through our Kelliwood Karate near me.