Are you searching for martial arts near me 77494? If so, Tiger-Rock Martial Arts have just the school for you. Anyone can be a student here at Tiger-Rock; we provide kids, teens, and adults martial arts programs for all ages. Life can become challenging; not having principles to stand on can leave you lost and feeling alone. Martial arts has so much rich history and tenets that will continue to stand the test of time. Each of these practices teaches the student how to take control of their life. Additionally, the student is learning self-discipline and enhancing physical fitness. 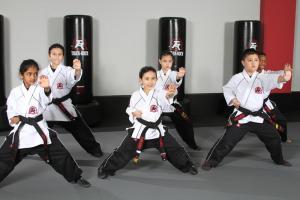 We offer an amazing martial arts program for children!

Hapkido: is a Korean martial art that utilizes joint locks, kicks, punches, and other striking attacks. Weapons such as a sword, nunchucks, ropes, cane, and more are also used. Hapkido is centered around using circular motions, non-resisting movements, and control of the offender. Additionally, this is accompanied by footwork and body positioning. This is assisting in obtaining power and avoid force against force.

Jiu-Jitsu: is a Japanese martial art designed for defeating an armed or armored opponent in which one uses no weapon or on a small one. Therefore, the individual neutralizes an enemy by pinning them down, joint locks, and throws using the offender’s force against him.

Taekwondo: is a Korean martial art of self-defense, considered one of the oldest martial arts forms. Training includes a learning system of blocks, kicks, punches, and open-hand strikes. Additionally, the practice consists of records of take-downs, throws, and joint locks. All of the following enhance speed, agility, balance, stamina, and so much more.

Krav Maga: is a hand-to-hand combat system developed in Israel centered around wrestling, grappling, and striking. This form of martial arts is highly intense as the practitioner uses brutal counter-attacks. These attacks are meant to immobilize the offender by any means.

Kung Fu: is a martial art that developed in China that umbrellas many fighting styles. Therefore, there are common themes to the various types. Schools, families, or sects classify these styles. Some techniques involve physical exercises that mimic animal movements. Other classes are influenced by Chinese philosophies, religions, and legends.

Physical and Mental Advancements of Taekwondo

Here at Tiger-Rock Martial Arts, the leading martial art that our instructors teach is Taekwondo. In reality, the ancient practice has a myriad of benefits for not only your body and safety, but it is excellent for your mental health as well. Below are some of the many benefits of Taekwondo:

Taekwondo, also known as Korean Karate, is a martial art that was developed centuries ago. It was designed to build up the entire person. The goal is to bring balance to mind, body, and soul. This martial art develops excellent character through the five principles mentioned previously: courtesy, integrity, perseverance, self-discipline, and indomitable spirit.

The word is broken down into three parts: Tae, meaning “foot” or “to kick or jump.” Kwon represents the “fist” or “to strike or block with hand.” Do stands for “the way of” or “art.” Once you put this all together, you will have “The art of kicking and punching.”

The practice derived from the traditional form, which was Taekkyon. This martial art was taught to the Hwarang warriors by Sillan warriors when the way became well-known in 50 B.C. These warriors were trained to fight off Japanese pirates who terrorized the kingdom of Silla.

Additionally, the militia set up an academy for the sons of royalty in Silla called Hwarang-do, which signified “the way of flowering manhood.” The Hwarang warriors studied Taekkyon, history, Confucian, philosophy, ethics, Buddhist morality, and military tactics. These warriors are also credited with spreading the practice in Korea, which later became worldwide. 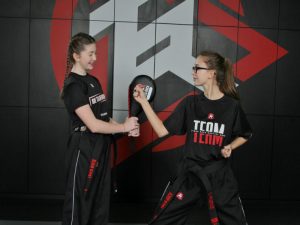 Our teen program is one of the best!

Things You May Not Know About Martial Arts

Tiger-Rock Martial Arts is here to support students to get to the next level in life. Take your life seriously and learn some long-lasting principles. As stated before, martial arts also improves your overall physical health. They are assisting you in becoming light on your feet and more in tune with the body. Additionally, learn how to better communicate with peers and family by restoring peace and neutralizing conflicts. Give us a call at (281) 202-3713 if you search for martial arts near me 77494 in Katy, TX area.

Give us a call today to learn about our special programs!