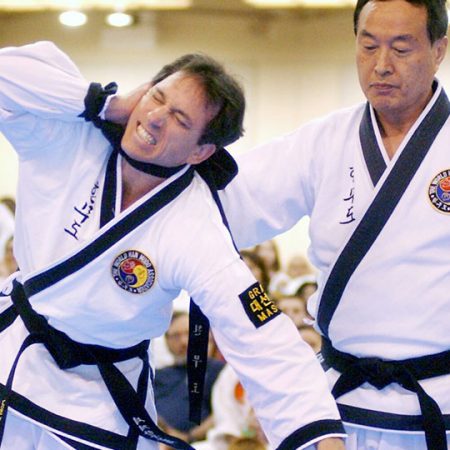 Han Mu Do, which is Korean for the Korean Martial Way, is a martial art that focuses on balance. Founded by Grandmaster He-Young Kimm (pictured), Han Mu Do incorporates various forms of Korean martial arts, including hapkido and taekwondo. As you already know, taekwondo is a cornerstone of Tiger-Rock Martial Arts training.

Han Mu Do is a balanced fighting system that is designed to be versatile against various forms of combat strategies. Defensive in nature, techniques in this system encourage continuously fluid and gentle movement that will leave an opponent immobilized on the ground.

Han Mu Do classes and training in Woodlands teaches three main defensive principles. From these principles, the practitioner will employ various strategies to counter the opponent’s attack.

See & Assess: When an attack is coming, quickly see and assess the situation. You will then know which approach to take.

Stop the attack: During Han Mu Do training in Woodlands you will be taught various soft and hard blocks as an initial defense against an opponent’s attacking offense. This may result in you being able to evade the attack, escape the attack, or, if necessary, escalate your defense.

Solve the situation: The successful defense against an attack depends on which level of intensity you will have to employ. The attack may end with you successfully escaping. It may continue to where you will have to exert control via joint locks. If you find yourself in significant danger, you will resort to striking, kicking, throws, joint locks, or weapons.

Training in Han Mu Do

There are 12 levels of rank in Han Mu Do. You will have to test before you advance in rank. Tiger-Rock Martial Arts in Woodlands offers a Han Mu Do class once a week. This does not require you to be enrolled in our regular taekwondo program. Classes are open to students 16 years of age and older.

Our Woodlands Han Mu Do classes last one hour. In class, you will learn various techniques such as takedowns, strikes, kicks, throws, and joint locks. Moreover, you will learn important philosophical concepts that will provide not only balance on the mat, but balance in your own life.

We invite you to take Han Mu Do classes at Tiger-Rock Martial Arts of The Woodlands. Contact us today to receive our schedule and pricing information.

Han Mu Do is available exclusively at our Sawdust Road location. We’ll see you on the mat!

With four great locations serving The Woodlands, Spring, and Tomball area, you are never more than 20 minutes away from a Tiger-Rock Martial Arts Academy. Choose either the Sawdust Road location, the College Park Drive location, Birnham Woods / World Champions Centre location, or our NEW Creekside/Tomball location for martial arts training in Woodlands.

We’ll see your child on the mat!